According to the Wall Street Journal, crashing commodity prices, a Chinese slowdown and a string of policy failures are forcing investors to reassess the risk of investing in Africa frontier markets where many countries have a disproportionate reliance on resources and have failed to use the commodity boom of recent years to industrialize their economies.

Stuart Culverhouse, an economist with Exotix, a London-based frontier fund and advisory firm, was quoted as saying:

“There’s a reaction to a year ago, to the euphoria of new investors coming into Africa. They are trying to get out now, and they are being quite indiscriminate.”

The upshot is that frontier market investors are moving their money from Africa to Asian countries like Pakistan, Bangladesh and Vietnam who are net energy and commodity importers which have shown more commitment to industrialization.

On the other hand, Laura Geritz, who runs U.S.-based Wasatch Frontier Emerging Small Countries with $1.1 billion under management, said one-quarter of her fund’s assets are invested in Africa and she has made no reductions there over the past few months. She was quoted as saying:

“One of the biggest flaws when investors look at Africa is that they think of it as a country and not a continent composed of very unique countries and companies… Africa’s countries can no longer depend on a booming export market for resources to China… Africa will have to depend on its greatest asset—it’s pool of young, bright, driven people.”

In addition, there are important exceptions as Kenya, which has a more diversified economy, and Ivory Coast, the world’s top producer of cocoa, are still attracting frontier investors because these countries are energy importers and have sounder public policies that generate confidence. 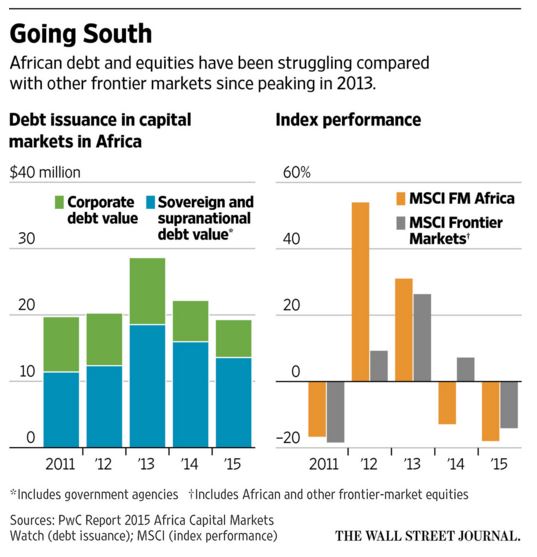 To read the whole article, Africa Bruised by Investor Exodus, go to the website of the Wall Street Journal. In addition, visit our Africa ADR and Africa ETF pages.