There is a good range of large cap, mid cap and small cap Brazil ADRs trading on major US stock exchanges as well as on the OTC market. These Brazilian ADRs represent most sectors of the economy with a heavy emphasis on the utility, mining and natural resource sectors in particular.

Small cap Fogo De Chao Inc (NASDAQ: FOGO) was a publicly listed US-based holding company operating upscale Brazilian churrascaria steakhouses that began in Brazil (where it still has operations) and is now headquartered in Texas with most restaurants being in the USA. The entire company was acquired in 2018 by Rhône Group (a private equity group), but there were indications in 2021 that it may go public again.

However, no discussion of investing in Brazilian ADRs and stocks is complete without mentioning Operation Car Wash (Operação Lava Jato). Originally a money laundering investigation, it expanded to cover allegations of corruption at Petrobras (NYSE: PBR), where executives allegedly accepted bribes in return for awarding contracts to construction firms at inflated prices (this criminal scheme was initially known as Petrolão or “big oil” because of the Petrobras scandal). After Brazilian construction company Odebrecht was deeply implicated, at least eleven other (mostly Latin America) countries became involved with now delisted diversified Peruvian conglomerate Grana y Montero SAA (NYSE: GRAM) being among other Latin American stocks tainted by the scandal.

Note: Stocks delisted from the OTC (whether due to mergers, acquisitions or for other reasons) have been left in the table (as their websites still provide a good feel for the company and the local market) and may still trade on local, regional or European (e.g. London) stock exchanges. They may also be holdings of country or region specific ETFs, closed-end funds or Indices.

Before investing in Brazilian stocks or Brazil ADRs, its worth reading a CFA Society article and paper entitled: “An Assessment of Dual-Class Shares in Brazil.” This paper explains how Brazilian stocks typically have “preferred” shares available to the public with no voting rights (but compensated with a slightly higher dividend) and “common” shares held by founders and insiders that has voting rights. In other words and like many tech or private equity controlled stocks, Brazilian stocks tend to be “closely held” companies controlled by families or a small group of insiders.

With origins dating back to 1890, the B3 S.A. – Brasil, Bolsa, Balcão (“B3 – Brazil Stock Exchange and Over-the-Counter Market”), formerly BM&F BOVESPA, was created in 2008 when the Brazilian Mercantile and Futures Exchange (BM&F) and the São Paulo Stock Exchange (Bovespa) merged. Its now one of the largest stock exchanges in the world in terms of market capitalization, the second largest stock exchange in the Western hemisphere and the biggest stock exchange in Latin America. Chicago’s CME Group also owns a 5% stake in the BS (who also owns a 5% stake in the CME Group).

Brazil’s second largest stock exchange is the Bolsa de Valores de Rio de Janeiro (BVRJ) which was founded in 1820, sold to BM&F in 2002 and now trades government bonds and currencies.

In addition, the Bolsa de Cereais e Mercadorias de Maringá (BCMM) was founded in 1982 and concentrates on the marketing of agricultural products nationwide. 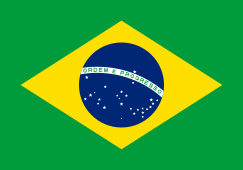 Here are some useful and mostly English news resources for investing in Brazilian ADRs or stocks or about Brazil in general:

For additional resources for investing in Brazil ADRs or stocks, check out all of our Brazil tagged articles/links.