AmCham China’s 2014 Business Climate Survey is making waves in China as companies surveyed said they feel unfairly targeted by China’s opaque laws on issues such as antitrust enforcement, IT security, food safety and other regulations that lack transparency. Highlights compiled from various third party sources from the survey of AmCham China members include:

AmCham China Chairman Gregory Gilligan was quoted in a press release about the survey as saying:

“As China’s economy rebalances from a state-led model based on exports and investment to a market-led model based on services and consumption, a difficult transition is to be expected for all private sector companies in China. Today’s update on our view of the investment environment, combined with what we are hearing from our members, demonstrates that the transition is indeed disruptive, perhaps more so for foreign companies, and progress on reform has been disappointingly slow.”

“Since we analyzed the investment environment last year, there have been many encouraging promises of reform, but the environment for many foreign companies has nevertheless deteriorated. While we still believe in China’s ability to make the changes necessary to transition to the next stage of development, delays and disruptions are leading foreign investors to alter their perceptions of the China market in fundamental ways.” 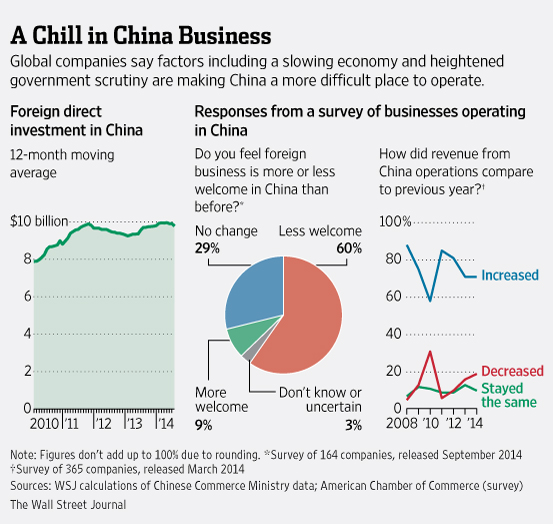 Source: U.S. Firms Feel Unwelcome in China, According to Survey

“Our members have been and remain enthusiastic supporters of China’s integration into the global economy, but sadly this survey suggests that their positive sentiment is eroding. Our concern is that if the investment environment deteriorates too far, important relationships and linkages between China and the rest of the world will be materially damaged, seriously impairing China’s ability to attract the investment that will be crucial in taking the country to the next stage of economic development.”

“We still believe that China’s economy will emerge from this difficult period stronger than before, and US companies in particular have a great deal to offer in the services sector so crucial to the economy’s transformation. We will be closely watching the upcoming Fourth Plenum, and hope to see concrete moves toward creating a society based on the rule of law, rather than rule by law.”

Chinese authorities are launching anti-trust probes which have singled out large Western companies, including Microsoft, Qualcomm, Audi, BMW AG and many others. Foreign car makers in particular, including Mercedes Benz and Audi, 12 Japanese car-parts suppliers, as well as chipmaker Qualcomm, have been under antitrust scrutiny or have been punished.

After the survey was released on September 2nd, the Epoch Times noted that AmCham’s website went offline. However, the survey’s whitepaper was still accessible in Google’s cache.

There is a press release entitled, AmCham China Supports Reform Agenda, Increasingly Concerned About Fairness, which summarizes some of the survey results.