After a record $246 billion of announced outbound takeovers in 2016, Chinese M&A dealmakers are now struggling to cope with tighter capital controls and increasingly wary foreign counterparties who have been spooked by a string of canceled deals. In fact, cross-border purchases plunged 67% during the first four months of this year – the biggest drop for a comparable period since the depths of the global financial crisis in 2009 (according to data compiled by Bloomberg). 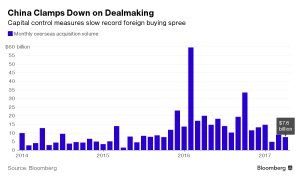 Nevertheless, the Chinese companies that are still doing overseas acquisitions are focusing on the consumer, energy and utilities sectors: 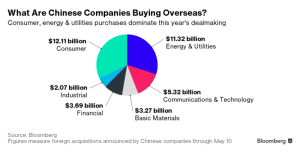 To get around China’s capital controls, some acquirers have tried to secure financing from the overseas branches of Chinese lenders by pledging their onshore assets as collateral, are pursuing smaller deals or are teaming up with offshore private-equity firms.

To read the whole article, China’s $246 Billion Foreign Buying Spree Is Unraveling, go to the website of Bloomberg. In addition, check out our China ETFs list and our China Closed-End Funds list.