China M&A a Bright Spot Amid Regional Decline (The Asset)

Asia-Pacific M&A deals amounted to US$302 billion in the first five months of this year for a 22% decline from a year ago. However, China still remained a bright spot with a 31% increase in M&A deals.

“Chinese investors were extremely active in Q1 as they looked beyond their own borders for growth opportunities, supported by government-led initiatives to diversify the economy. This was after a record year for Chinese investment into the US and EU in 2015.” 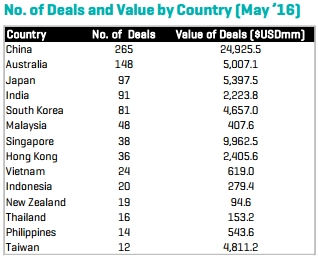 To read the whole article, China M&A is one bright spot amid regional decline, go to the website of The Asset. In addition, check out our China closed-end fund list and China ETF list pages.