No Improvement in Asia Pacific Corporate Payments in 2015 (Coface)

Coface’s annual survey on Asia-Pacific economies which questioned 2,793 companies in 8 markets (Australia, China, Hong Kong, India, Japan, Singapore, Taiwan and Thailand) is out and according to the press release:

As for individual sectors: 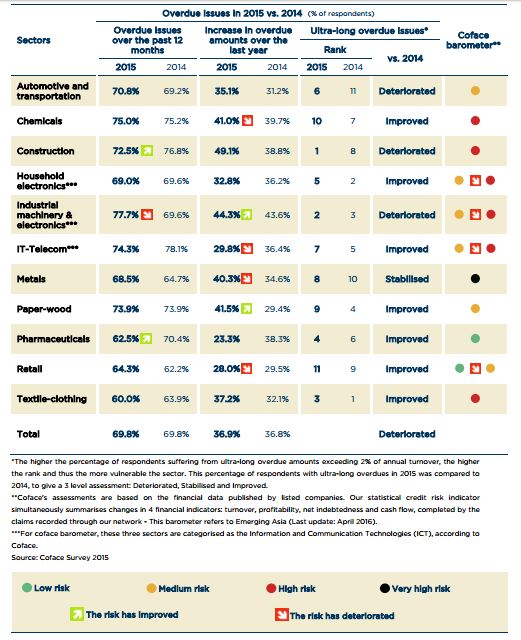 Jackit Wong, Asia Pacific Economist of Coface, had this to say in the actual report:

“Looking ahead, 56.0% of respondents consider that the global economy is unlikely to pick up in 2016, in line with Coface’s predictions. This cautious stance could suggest a more prudent approach to credit control when offering sales on credit. 2016 is set to be a challenging year, with mounting global uncertainties linked to China’s growth moderation, the fiscal difficulties experienced by oil exporting countries and US monetary normalisation. Taking these factors into consideration, overall company payment experience in the 8 selected regional economies is likely to remain weak.”

To read the whole press release and report, No Improvement in Asia Pacific Corporate Payments in 2015, go to the website of Coface. In addition, check out Asian payments situation worsens and Rise in late payments cause for concern in Asia in Global Trade Review (GTR) and The Asset, respectively.