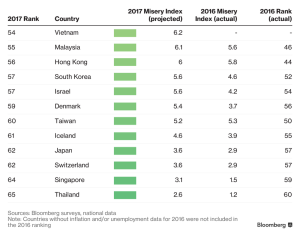 More importantly, some emerging markets have made strides to become less miserable: 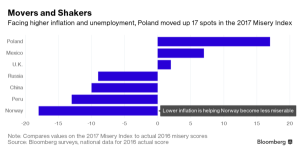 Peru had the biggest noteworthy move of 13 positions. However, Peru was more miserable than expected in 2016 as a drought sparked food-price inflation and weak domestic demand weighed on the labor market. Economists though appear to agree with Peru’s central bank which sees improvement in investment and trade on the horizon.

Note that the U.S. has remained among the 20 least miserable countries (#49), a few spots worse than China, with which it tied in 2016.

To read the whole article, These Economies Are Getting More Miserable This Year, go to the website of Bloomberg. In addition, check out: Bloomberg’s Misery Index’s Most Miserable Emerging Markets