Research Affiliates has a useful graphic showing Russia’s foreign debt and investors should keep in mind that in the twentieth century, the country had two massive defaults: First during the Bolshevik Revolution when all private capital was effectively confiscated (with any owners being killed or exiled) and then in 1998 when a default on government obligations caused the collapse of Long-Term Capital Management.

The good news for investors today is that compared to the debt of western countries, Russia’s foreign debt is not large at $731 billion, or about 34% of Russia’s annual GDP (In sharp contrast, US foreign debt is close to 100% of GDP and that’s probably not counting all the unfunded pension obligations at the state and local levels). Moreover, Russia has $478 billion in currency reserves – meaning a default is unlikely. 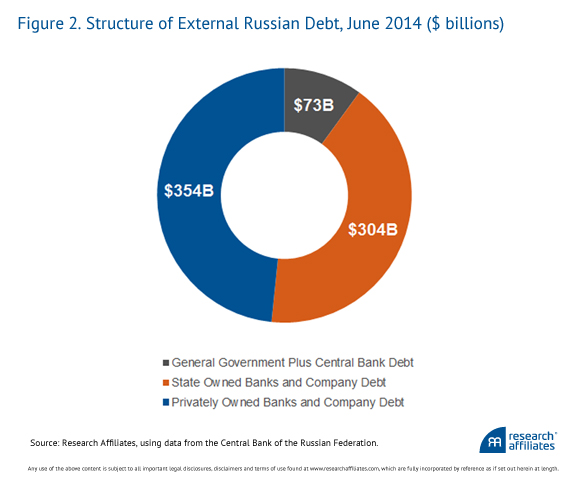 However, the sanctions are impacting the ability of Russian companies to refinance their hard currency debts. For example: Research Affiliates noted that Russia’s biggest oil company, Rosneft, seems to have created the turmoil which caused the ruble to drop sharply in December:

According to the Financial Times (2014), Rosneft has $19.5 billion in debt due next year. If oil prices stay at the current $60 a barrel level, its revenue will cover only $15 billion; it is short $4.5 billion. Rosneft recently placed the equivalent of $10.8 billion in a ruble-denominated bond offering, and it is rumored that the company substantially converted the proceeds into dollars to replenish its reserves. Apparently, this transaction caused the recent panic in the currency and stock markets.

To read the whole article, The Wild, Wild East: Risks and Opportunities in Russia, go to the website of Research Affiliates. In addition, also have a list of Russia ADRs here and Russia closed-end funds here.