A recent Wall Street Journal article about how the mining collapse has hit Africa’s middle class pointed out how back in 2011, the African Development Bank had crowed (in a paper entitled: “The Middle Pyramid: Dynamics of the Middle Class in Africa”) that the continent’s nascent consumer class was already 350 million strong. Such pronouncements had multinational banks, brewers and car makers clamoring to make customers of them.

However, the bank’s tally of so-called middle class consumers included Africans who make hardly more than $2 a day – an income too low to put many families in the market for world-class goods and services. Credit Suisse concluded in October (see “Annual Global Wealth Databook”) that there are actually just 20 million middle class Africans, defined as having the equivalent of at least $50,000 in assets, adjusted for local prices. That is a mere 3% of the continent’s population. David Cowan, Citigroup’s chief Africa economist, was quoted as saying:

“The emerging middle class has come under enormous scrutiny. Africa got oversold as an idea.”

Another earlier 2014 survey from Standard Bank had also put Africa’s middle class at a mere 15 million spread across 11 countries, with only 800,000 middle class households in Kenya, a nation of 44 million people. 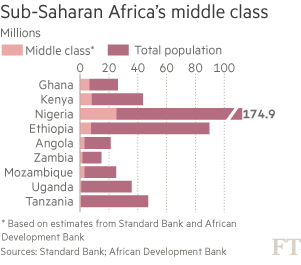 Its worth noting that in mid 2015, Nestlé, the world’s biggest food company, announced it was cutting 15% of its workforce across 21 African countries because it says it overestimated the rise of Africa’s middle class. The Financial Times quoted Cornel Krummenacher, CEO of Nestle’s equatorial Africa unit, as saying:

“We thought this would be the next Asia, but we have realised the middle class here in the region is extremely small and it is not really growing… Urbanisation is usually very good for manufacturers, but in this case many people are literally living in slums, so they have nothing to spend.”

Mr Krummenacher also pointed to poor infrastructure — he said transport prices account for up to 75% of costs — as well as corruption, floods, riots and currency depreciations.

To read the whole article, Mining Collapse Cripples Africa’s Dreams of Prosperity, go to the website of the Wall Street Journal.