The latest YPO Global Pulse Confidence Index survey of African CEOs found that confidence among business leaders in Africa dropped to its lowest level in more than five years during the fourth quarter of 2014 as commodity prices weakened (Note: YPO or Young Presidents’ Organization is a not-for-profit, global network of young chief executives). Specifically, the YPO Global Pulse Confidence Index for Africa dropped 2.6 points to 59.3 in the January 2015 survey. This marks its first time below the 60.0 mark since October 2009 albeit at 59.3, the index is still in optimistic territory. However, Africa now trails the global composite reading of 62.5 by more than 3 points.

Its worth noting that Nigeria CEO confidence plunged 13.1 points to 43.6 as oil prices tumbled (Note: Levels below 50.0 on the scale are in pessimistic territory, meaning that CEOs expect future conditions to be worse than they are today). This marks the second time in the 5.5-year history of the YPO CEO survey that confidence in Africa’s biggest economy has fallen below 50 (the first time was in April 2010).

On the other hand, confidence in South Africa remained relatively stable – losing only 0.6 point to land at 62.6. 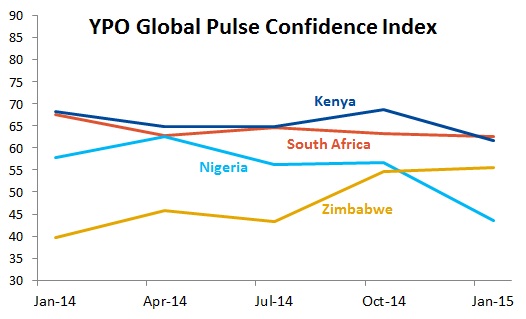 “Economic diversity, growing foreign direct investment and more socially-inclusive development agendas present promising growth opportunities across the region. At the same time, weak commodities prices combined with the longer-term realities of stagnation in the EU and deceleration in China, two of Africa’s key trading partners, are causing CEOs in the region to exercise a bit more caution in their business forecasting.”

To read the whole press release, YPO: Confidence among African business leaders falls to five-year low, go to the website of YPO.