The latest YPO Global Pulse Confidence Index survey of Asian CEOs showed a decrease in confidence that is most pronounced in ASEAN economies (Note: YPO or Young Presidents’ Organization is a not-for-profit, global network of young chief executives). Specifically, the YPO Global Pulse Confidence Index for Asia hit its lowest level since October 2013 registering 62.2 in the January 2015. The regional reading still remains in optimistic territory and is in line with the global composite at 62.5, but it should be noted that confidence in China declined for the fourth consecutive quarter with the index losing 3.2 points to land at 59.7. 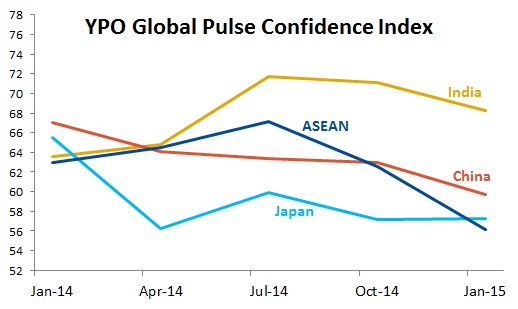 Raymond Tong, COO of Hong Kong’s Maxim’s Group, recently appeared on CNBC to discuss the results. He made the key point that CEOs are real business operators and when they talk about outlook, they are talking about how they plan for things like headcount and capital expenditure whereas “The Street” gets excited about stuff like “China cutting rates.”

“Decelerating growth in China and uncertainty around the global economic recovery, especially in Europe, combined with the sell-off in crude oil and other commodities, is causing business leaders in the region to bake a bit more caution into their forecasts. But on the whole, confidence levels across the region are solid, indicating that CEOs expect economic expansion to continue, albeit at a bit more prudent rate.”

To read a press release about the Asia CEO survey results, Asian CEO confidence falls to lowest level in more than a year, go to the website of the YPO (Young Presidents’ Organization).