The first quarter 2015 results are in for the Nielsen Global Survey of Consumer Confidence and Spending Intentions where more than 30,000 online consumers in 60 countries throughout Asia-Pacific, Europe, Latin America, the Middle East/Africa and North America are polled.

By region, consumer confidence was up one point in Asia-Pacific for the highest quarterly index score of 107 (confidence scores in nine of 14 Asia Pacific countries were at or above the baseline reading of 100) while North America held steady at 106. Confidence in the Middle East/Africa (96) and Europe (77) also edged up one point each but decreased two points in Latin America (86) – the region’s lowest score since 2011.

Consumer confidence increased in 37 out of 60 countries survey compared with only 17 of 60 markets (28%) in the previous quarter. India’s score of 130 was the highest score among 60 markets and was one point higher than in fourth quarter 2014. India was followed by Indonesia (123), the Philippines (115) and the United Arab Emirates (115). On the other hand, the Ukraine reported the lowest score of 41 for a quarterly decline of 11 points – the biggest drop in the survey. 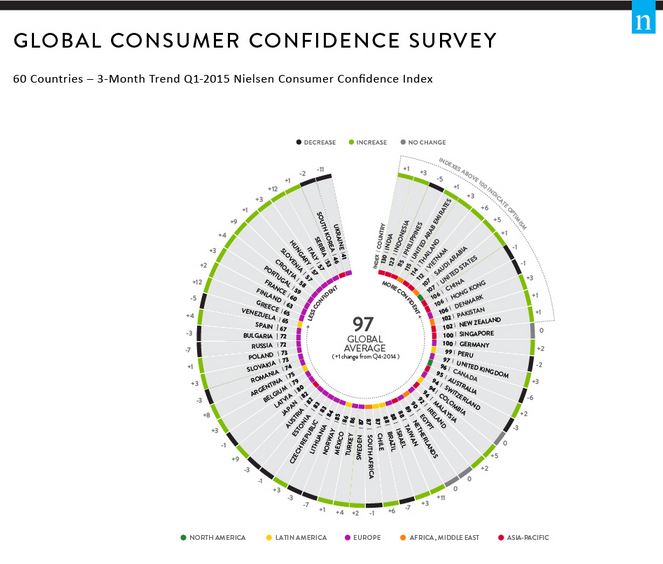 “While confidence across global regions remained relatively stable in the first quarter, there is considerable variation across different markets. In the first quarter of this year, the key emerging markets of Brazil and Russia saw large declines in confidence for the second consecutive quarter, with the drop in oil prices and the political instability in Brazil. China dropped another index point at the start of this year, which comes after a four-point decline in the previous quarter, reflecting the recent slowdown in GDP there.”