In the first quarter 2015 Nielsen Global Survey of Consumer Confidence and Spending Intentions, India’s score of 130 was the highest score among 60 markets surveyed and was one point higher than in fourth quarter 2014. Consumer confidence in India has been on the rise for six consecutive quarters and has reached a level that has not been reached since 2011.

Piyush Mathur, President of the Nielsen India Region, commented in the report:

“The urban Indian consumer started the year with positive sentiment in anticipation of improvement through reforms and stimulus announced by the new government. These initial signs of optimism reflect anticipation of economic recovery that are yet to manifest when you look at fast-moving consumer goods and auto sectors in particular over the last few quarters.  Moreover, infrastructure, engineering and other industrial sectors are yet to gather pace.  The fall in inflation is expected to have an impact on disposable income overtime, but it will take time for the sectors to be restored to perceptible and sustainable growth.” 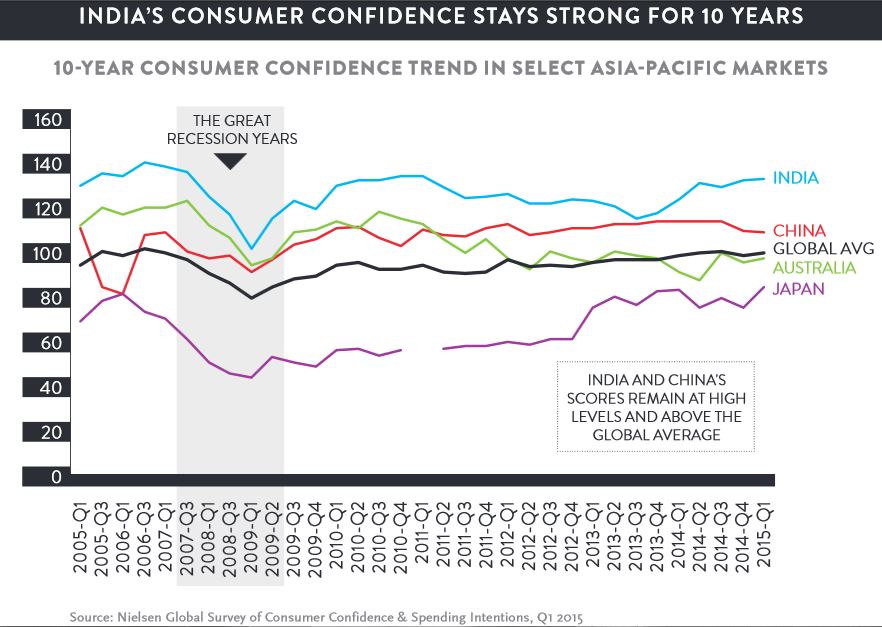 To read the press release, Global Consumer Confidence Is More Upbeat in 2015, but Variation Exists Across Markets, or the full report, Q1 2015 Consumer Confidence Report, go to the website of Nielsen. In addition, check out our India ADR list, India closed-end fund list and India ETF list.