Adrian Lim, a Senior Investment Manager with Aberdeen Asset Management who is based in Singapore, was recently interviewed by one of their in-house publications where he discussed the Aberdeen India Fund, India stocks and investing in India in general. In the interview, Lim talked about the India budget, which includes a 25% jump in planned infrastructure spending with US$39 billion earmarked for new roads, railways, bridges and ports, and how that will impact the Aberdeen India Fund:

Our cement stocks, including Grasim Industries and Ultratech, as well as Holcim subsidiaries Ambuja and ACC, should benefit from increased construction activity. Planned welfare schemes for India’s poorest and the focus on boosting agricultural wages is positive for consumption trends. A rise in rural spending could drive demand for two-wheelers and auto makers such as Hero MotorCorp could benefit. Meanwhile, consumer stocks, such as Nestle India, Hindustan Unilever and Godrej Consumer Products, should also gain from increased spending power among the populace.

Regarding the performance of the Aberdeen India Fund, Lim commented:

Our fund gained around 11% as at end February, outpacing the benchmark MSCI India by one percentage point. Standout performers name included automotive components maker Bosch Industries, Container Corporation of India, and Lupin, a generic pharmaceutical company. We’ve taken some profits in Bosch Industries after a run-up in its share price. Container Corporation of India’s stock rose after the government committed to a bigger increase in infrastructure spending in the budget; while Lupin has made good progress on its product pipeline and high-margin generic drugs. Meanwhile, not holding energy stocks such as Reliance Industries and Natural Gas Corp benefited us. Conversely, share prices of ICICI Bank, Gujarat Gas and Hero Motocorp declined, following lacklustre Decemberquarter results. 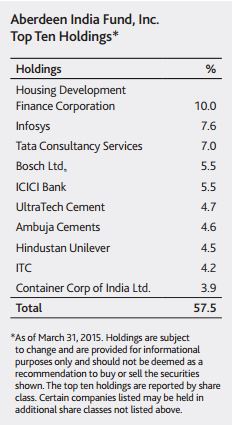 Lim commented that they favor the domestic consumption theme for India because of the scope for improving demand from demographic shifts, rising real wealth and urbanisation. Hence, the Aberdeen India Fund has a bias towards household goods, financials, autos, cement companies and certain utilities. He commented:

For example, one stock we like is HDFC, a leading mortgage provider in India with excellent asset quality. Another name would be Godrej Consumer Products, a home-grown maker of household and personal products with a leading position both domestically and in other emerging markets.