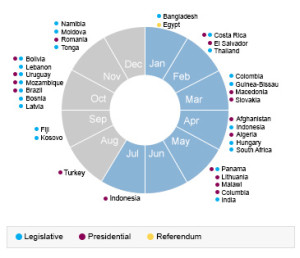 The article itself noted that in 2014, billions of people representing around two-fifths of the world’s population have been, or will be, exercising their right to vote and choosing new leaders. Of the major emerging markets, India, South Africa, Indonesia and Turkey have already held elections, while Brazil will do so in the coming months.

To read the whole article, Emerging Markets: 2014 elections, go to the website of Hargreaves Lansdown.