Chart: Asia GDP Per Capita Has Risen Sharply Since 1960 (Aberdeen) 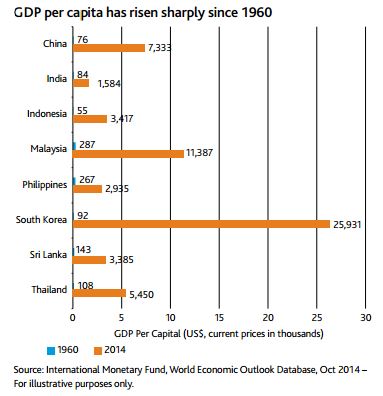 The brochure went on to note that while China and India are experiencing leaps in growth, Asia’s smaller but equally robust economies are still part of this golden space:

From Indonesia, Malaysia, Singapore and South Korea to Thailand, Asian countries across the continent are getting wealthier, notably in major metropolitan areas. Urbanization in Asia is moving a massive population of better educated and higher earning citizens to cities and creating a thriving middle class. Take a look at Malaysia and South Korea as examples. Malaysia had $287 GDP per capita in 1960, saw that roughly quadruple by 1980 and in 2014, the country soared to $11, 387 GDP per capita. South Korea saw an even higher growth, growing from $92 GDP per capita in 1960 to $25,931 in 2014.

To read the whole article, The Sun Rises in the East – Be Early: Rise and Shine, go to the website of Aberdeen.