The latest YPO Global Pulse Confidence Index survey of Brazil CEOs shows that President Rousseff’s new economic team has had little effect on business confidence in in the country (Note: YPO or Young Presidents’ Organization is a not-for-profit, global network of young chief executives). Specifically, the YPO Global Pulse Confidence Index for Brazil stood at 52.3 in January or a point above where it was in early October ahead of the general elections.

Business confidence in Brazil has declined steadily since peaking at 74.4 in October 2010 when GDP growth was above 7%. By last July though, the index had fallen to 51.2 (a reading below 50 would indicate pessimism) and has hovered near this level ever since. 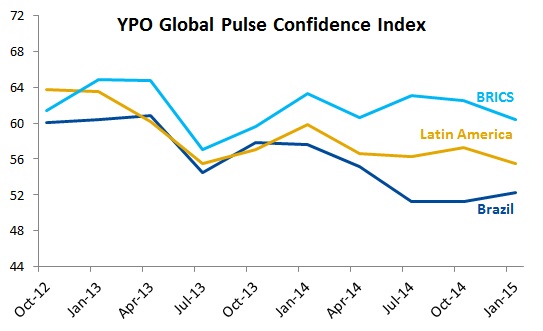 Surveyed Brazilian CEOs expressed relative optimism about their ability to grow top-line revenues in 2015 while exhibiting more prudence in their hiring and investment plans. More than half (57%) said their sales would increase by at least 10% in 2015, but only 22% planned to hire new employees and only a third said they would step up capital spending. The majority (63%) of Brazilian CEOs also said business and economic conditions were worse in January than they had been six months earlier with 42% saying conditions would deteriorate even further into mid-2015 while 26% thought they would improve.

“Business leaders in Brazil have mixed feelings about their economic prospects. On one hand, they have faith in the growth potential and entrepreneurial spirit inherent in our country. On the other hand, persistent problems related to infrastructure and corruption continue to plague businesses.”

To read the whole press release, YPO: CEOs in Brazil lack enthusiasm, go to the website of YPO.