Appliance maker Whirlpool Corporation (WHR) recently had a good earnings report and has been a solid performer for investors over the past few years to the point where Jim Cramer, the host of CNBC’s Mad Money, has periodically recommended the stock as a way to bet on a recovery.

However, he and many other investors along with Western consumers who are familiar with appliances made by General Electric (GE) or Electrolux AB (ELUXY.PK), may have overlooked the rise of China’s Haier Electronics Group (HRELF.PK), which now has the biggest global market share in the white goods segment (albeit Whirlpool has just announced a new acquisition in China). Moreover and given the recent bad experience my parents had with their new $500 Whirlpool wtw4930xw super capacity washing machine, I have a feeling neither Jim Cramer nor his mom own a Whirlpool appliance and that Whirlpool’s management needs to reevaluate some of their priorities.

Whirlpool’s Recent Earnings Report and a Bigger Bet on China

On July 19th, Whirlpool posted a stronger-than-expected jump in quarterly profit plus management raised its full-year outlook thanks to sales gains in all markets, including Europe and North America. Specifically, sales rose 5.3% to $4.74 billion thanks to unit sales increases in Europe and Latin America where revenue rose nearly 6% while revenue from the North American segment increased 5%. Second-quarter profit also came in at $198 million ($2.44 per share) verses $113 million ($1.43 per share) for the same period last year.

Whirlpool attributed an elevated demand forecast to the improving US housing market, rising discretionary sales of appliances thanks to improving consumer confidence and growing sales of replacement appliances as those purchased before the 2008 economic recession by consumers like my parents, begin to wear out. And for what its worth, Jim Cramer suggested back in April that investors take a look at Whirlpool (among a list of other companies that can “do no wrong” in the current market environment thanks in part to declining commodity prices) because the “cost of the steel and energy needed to make a washer and dryer is coming down.”

On August 13th, Whirlpool announced an agreement to become a majority shareholder (51%) in Hefei Rongshida Sanyo Electric Co. Ltd., a home appliances manufacturer based in Hefei, China, for approximately RMB 3.4 billion or $552 million in cash. Basically, Whirlpool is buying out Sanyo’s interest in the company (Note: Sanyo is now owned by Japan’s Panasonic Group) and according Mike Todman, the president of Whirlpool International:

“Hefei Sanyo has an established nationwide distribution platform, a scaled manufacturing presence with opportunity for growth, and is ideally located in Hefei, a recognized appliance hub in China.  Hefei Sanyo is a well-managed, profitable business with great prospects, led by an experienced and capable executive team with a track record of delivering strong performance.”

However, the Wall Street Journal noted that Hefei Sanyo is a distant third in China’s appliance market behind the Haier Electronics Group and the Midea Group while Whirlpool was also noted to have tread cautiously there because of the large number of local appliance manufacturers and the pressure to slash prices on appliances. Whirlpool’s China sales strategy has mostly focused on the higher end of the appliance market while the Asia business is the company’s smallest geographic market with $847 million in sales last year – a mere 4.7% of total global sales.

With the recent earnings report along with the latest foray into China in mind, I have some other ideas as to where Whirlpool’s extra sales or profits might be coming from and about what management should really be worried about.

But My Parents Bought a $500 Whirlpool Lemon

In late spring, my parents purchased a new Whirlpool wtw4930xw super capacity washing machine for about $500 as they needed to replace their old Whirlpool washing machine which had only lasted about four or five years (Note: When I was growing up, I remember a refrigerator in our utility room purchased by my great grandparents when they lived in the house and it lasted fifty years).

Unfortunately and despite multiple visits by a repairman, the new washing machine lasted about a month (Note: Of the three reviews for the Whirlpool wtw4930xw super capacity washing machine that I see online, two reviewers, one on Amazon and another one here on a different website, had the same experience my parents had plus there are over 1,000 complaints about Whirlpool on the website of Consumer Affairs). Moreover, what happened might give investors some insight into Whirlpool’s current corporate thinking:

However and had my parents bought shares of Whirlpool about five years ago instead of their previous washing machine, they would have about an 88% return as of July 20th right after the earnings report (and before the 2008 financial crisis started skewing the rate of return) – almost enough to buy a replacement for their last washing machine. 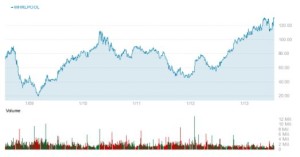 Despite the stock performance and the recently announced acquisition in China, Whirlpool might want to start worrying more about China’s Haier Electronics Group both at home and abroad. Headquartered in the Chinese city of Qingdao, which was historically known as Tsingtao (as in the Tsingtao Brewery and Tsingtao beer – the #1 selling Chinese beer in the US), the Haier Electronics Group manufactures a wide variety of home appliances such as air conditioners, microwave ovens, washing machines, refrigerators and televisions with most of its non-China manufacturing plants being in SE Asia and even in Africa as the company has been focused on emerging market consumers.

American investors might remember how the Haier Electronics Group put in a 2005 bid for Maytag that was ultimately topped by Whirlpool. Otherwise and for American consumers, the company initially concentrated on compact refrigerators and electric wine cellars, but a quick look at the Haier America website seems to suggest the company has really expanded its US product line into a full range of appliances plus it has built a $40 million plant in South Carolina back in 2000.

However and while the Haier Electronics Group has put in a very good performance for intrepid investors, it’s not exactly investment grade material as shares are lightly traded (averaging 3,000 shares a day) on the OTC. Moreover, the partially public company is still technically a Chinese “collective” owned by its employees, which in reality means it’s controlled by Communist bureaucrats who may or may not have more business sense than American executives. 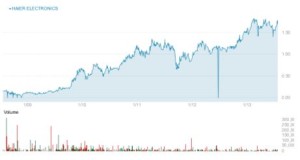 Having lived in Southeast Asia for a decade, I have come across or used my share of Haier branded appliances, but I can’t honestly say one way or the other whether they are any better than what Whirlpool or other Western companies produce. However, I do have news for any American company or company executive who thinks it might be a profitable long-term strategy to sell $500 appliances with $60+ three year warranties only to have the appliance need to be replaced or repaired in the fourth year: Americans increasingly cannot afford to play that game.

The Haier Electronics Group could very well be following the playbook created by the Japanese automakers a couple of decades ago e.g. start by exporting; then set up plants in Southern right-to-work states; build up good brand recognition by going for quality and reliability; and then crush the American competition (or at least force them to change how they do business). In other words, Whirlpool’s executives need to find a better way of giving investors great earnings reports and they better keep an eye on what Haier is doing in America as they are a little late entering the China market.