Nick Robinson, the Director / Head of Brazilian Equities Aberdeen Asset Management and a manager for the Aberdeen Latin America Equity Fund, Inc (NYSEMKT: LAQ), recently gave an interview where he talked about various Latin America stocks and sectors that he and his fund are focused on.

Robinson commented that all Latin America sectors posted negative returns for the first quarter with the traditional defensives, consumer staple and utility companies performing relatively better than companies in the energy, industrials and materials sectors. The exception was the healthcare sector, which posted very weak performance because Mexican based Genomma Lab Internacional SAB De CV (OTCMKTS:GNMLF) reported extremely weak numbers and in turn the market heavily sold off its shares.

When asked about Latin American stocks that had performed well, Robinson said:

Grupo Aeroportuario del Centro Nort (NASDAQ:OMAB), a Mexican airport operator, saw good performance during the quarter. The company reported very strong passenger numbers reflecting a shift in travel around the country from buses to internal flights as well as a healthy international travel environment. Banco Santander-Chile (NYSE: BSAC) also performed well for the quarter. After a few tough years, the company recognized the need for increased investment into their infrastructure and has begun to see growth.

As for some underperforming Latin America stocks:

Arezzo Industria E Comercio SA (BVMF:ARZZ3), a shoe manufacturer and retailer performed poorly in the quarter. There were no fundamental issues with the company; however concerns over the consumer environments in Brazil weighed on the stock. Natura Cosmeticos SA (OTCMKTS:NUACF) also had poor performance due to management changes and increased competition for their beauty products. Wilson Sons (BVMF:WSON33), a Brazilian port operator, underperformed in the quarter over concerns in trade flows into Brazil given the economy.

One of the core challenges Latin American companies have faced is the deterioration of corporate margins over the last few years. Corporate margins have begun to show signs of improvement and are continuing to become stable, especially in Brazil. We believe this is very important and snows that companies are now more focused on cost cutting and stabilizing margins. 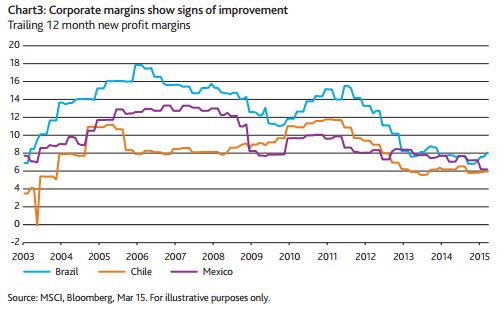 Its also worth pointing out the Aberdeen Latin America Equity Fund’s top holdings at the end of the first quater: 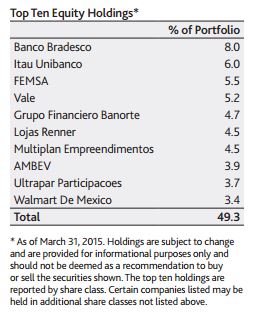