Back in May, MSCI announced that both Qatar and United Arab Emirates, which together make up a third of the MSCI Frontier Markets index, had been upgraded from frontier market to emerging market status. The index now incorporates 24 countries with the biggest constituents now being Kuwait, which is exposed to turmoil in the Middle East, and Nigeria, which has exposure to the Ebola epidemic and the Boko Haram extremist group.

In a detailed article about the changes and frontier markets in general, Money Marketing quoted Tilney Bestinvest managing director Jason Hollands as saying:

“The promotion of UAE and Qatar to the Emerging Market index in May has fundamentally change the make-up, and arguably the risk profile, of the frontier markets universe… You need to be aware that the universe you are investing in today will look quite different to the one at the start of the year.”

“Some of the big emerging markets are often large countries which are very reliant on commodities for income and wealth. So the good thing about frontier markets is that a fair number of them, certainly places like Myanmar, are not commodity markets at all and they are also just opening up to investors now.”

“Frontier markets are where emerging markets were 20 to 25 years ago and if you look at what China, India, Russia and Brazil have achieved since then, I think the potential is clear. They represent potential economic powerhouses of the future, so they are increasingly popular hunting grounds.” 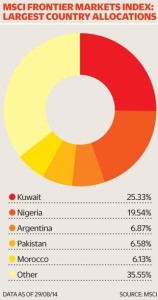 To read the whole article, Could seismic shift in frontier markets promise a new dawn?, go to the website of Money Marketing.