The Singapore Story: Not a Sure Thing for Investors?

Lee Kuan Yew, the controversial founding father and former prime minister of Singapore, summed up his country’s history best when he entitled his memoirs, From Third World to First: The Singapore Story. However, there is more than one version of the Singapore story – something investors in the iShares MSCI Singapore Index Fund ETF (EWS), the iShares MSCI Singapore Small Cap Index Fund (EWSS) and The Singapore Fund (SGF), the primary investment options American investors have for investing in Singapore or in the Southeast Asian equities listed there, need to be aware of. 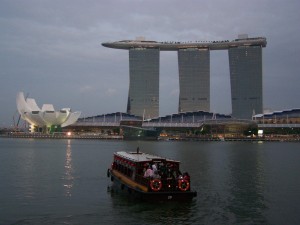 The Marina Bay Sands in Singapore.

Among the other versions of the Singapore story is one that says the country was destined to succeed (at least in the past) simply because of its strategic location, deep water port and “one degree more” of efficiency in an otherwise “bad neighborhood” filled with mismanagement, corruption and political uncertainty. And then there is a recently written post (or rather a lengthy rant entitled “i dun unerstan u lah!: An exposé of Singapore and Singaporean retardation“) which has attracted wide attention online as it was written by an anonymous European working in Singapore and he or she goes into considerable detail to describe so-called “Singaporean retardation” or “stupidity.” Finally, Singaporeans themselves are growing increasingly restless over their country’s high cost of living, the presence of large numbers of foreign workers and corruption scandals – which could spell trouble for the long-ruling People’s Action Party (PAP) in the 2016 general elections with such changes impacting the iShares MSCI Singapore Index Fund ETF, the iShares MSCI Singapore Small Cap Index Fund and The Singapore Fund.