China and India to Overtake U.S. Economy This Century (Bloomberg)

According to a report by the Centre for Economics and Business Research (CEBR) in London, three of the four largest economies in 2032 will be Asian: China, India and Japan. By that that time, China will have overtaken the U.S. to hold the No. 1 spot while India’s advance won’t stop and will eventually take the top place in the second half of the century. India will leapfrog the U.K. and France next year to become the world’s fifth-biggest economy in dollar terms and advance to third place by 2027 by moving ahead of Germany.

Also by 2032, South Korea and Indonesia will have entered the top 10 – replacing the Group of Seven nations of Italy and Canada. 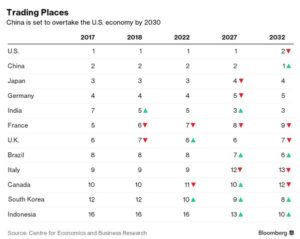 To read the whole article, China to Overtake U.S. Economy by 2032 as Asian Might Builds, go to the website of Bloomberg.