The HSBC Emerging Markets Index (EMI), a monthly indicator derived from the PMI™ surveys, fell to 51.7 in July, from 52.3 in June, indicating slower output growth across global emerging markets. That said, the latest expansion was stronger than the average seen over the first half of 2014.

Key points from the report included: 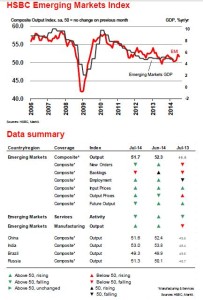 To read the whole report, EMI press release – Aug 2014, go to the Emerging markets PMI section of the HSBC website.