Tim Craighead, the head of Asian research at Bloomberg Intelligence in Hong Kong, has noted that as of the end of last week, about $30 billion has been wiped from the value of Macau casino stocks in the past month alone. He commented:

“Beijing’s anti-corruption push spurred an anti-extravagance mindset among wealthy Chinese that are core to Macau’s VIP business. This may be here to stay…. Our forecast for this year in [Macau] revenue [is] to be down by 18 percent. That’s concerning when it comes to estimates on earnings… There’s been a massive drop in earnings expectations following that revenue rebalancing… We are now down to about 10-and-half-times [price to earnings ratio]. In this case the stocks have declined so much that we actually have valuations that are returning close to long-term lows.”

In addition to the VIP segment problems, there has also been troubling fall in the Macau casino mass market:

“More recently we have seen mass market revenue decline. That had been such a stable – and growing – base, and it’s a very high margin business. So with that coming down, that creates concern. We still attribute an awful lot of that [mass market decline] to the smoking ban.”

However, there is reason to be optimistic about Macau casinos in the second half of 2015 as a fresh supply of gaming and tourism facilities open in Macau:

“As we look into the second half…we still see opportunities of a stimulated economy, of new resorts coming in, of more hotel rooms.”

In addition, Bloomberg has the following chart showing the combined market capitalization of the six main Macau casino operators which fell in morning trading last Thursday to below the $88.5 billion level when Xi Jinping was made head of the Communist Party on November 15, 2012: 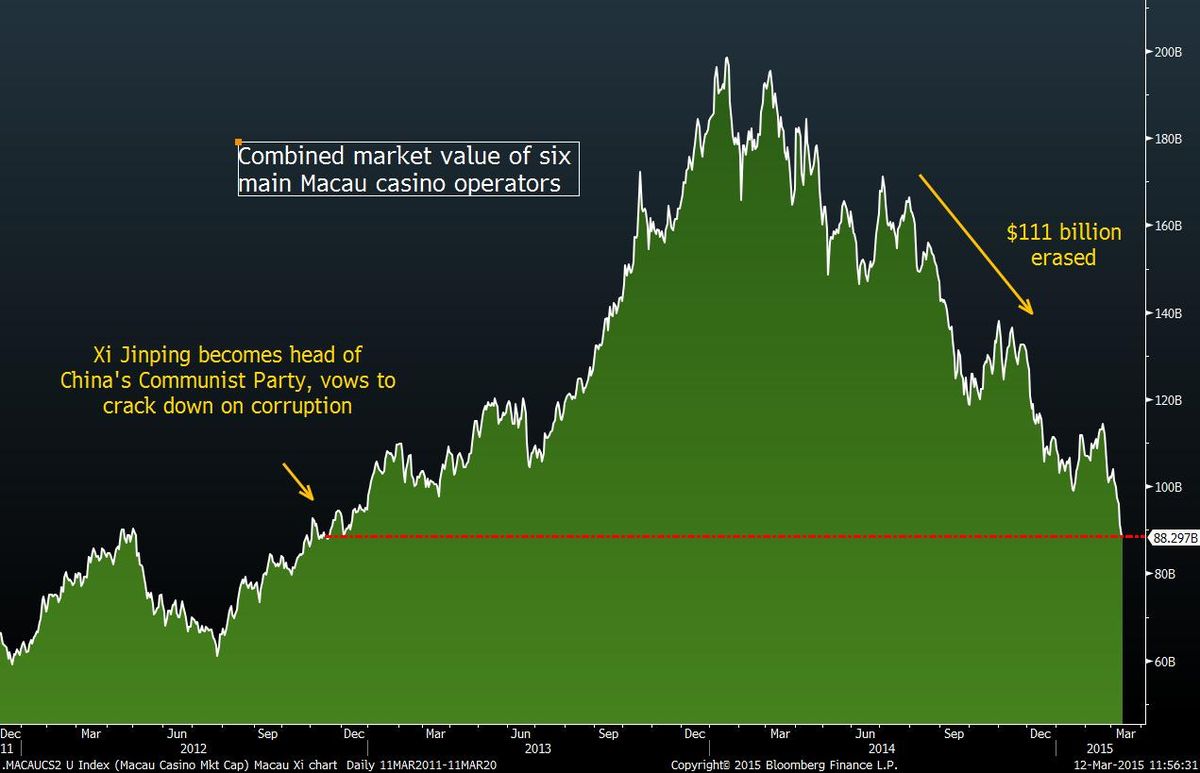 To read the whole article, Macau Boom-Bust Comes Full Circle Under Xi as $111 Billion Lost along with US$30 bln cut from Macau names in month: Bloomberg analyst, go to the websites of Bloomberg and GGRAsia, respectively. In addition, check out our Macau Casino stock list page.