Media outlets have picked up on a Friday presentation by short seller Jim Chanos of Kynikos Associates given within minutes of the Alibaba IPO warning of risks to China’s economy. CNBC specifically said that in a 30-page presentation they have obtained, Chanos said the stock market is “no longer cheap” and that “China global risk” is increasing.

Its worth mentioning that Chanos made a name for himself for uncovering the fraud at Enron long before anyone else figured it out and then shorting the stock. He has also been predicting doom and gloom for China since 2010.

And while the presentation is apparently not available to the general public, there were a couple of interesting Tweets from one attendee at the conference:

Chanos says $BABA actual margins are hard to know because they are investing most of the FCF into logistics businesses.

Chanos: “Quick little thought about Alibaba: everyone forgets that he was a thief.” $BABA — Dasan2.0 (@DasanRedux) September 19, 2014

Chanos’ comments came within minutes of Alibaba’s first trade on the New York Stock Exchange. In case you don’t remember or know the story about Ali Baba and the Forty Thieves (علي بابا والأربعون لصا), click here for the Wikipedia entry to refresh your memory. Otherwise, here is a quick synopsis:

In the story, Ali Baba is a poor woodcutter who discovers the secret of a thieves’ den, entered with the phrase “Open Sesame”. The thieves learn this, and try to kill Ali Baba. But Ali Baba’s faithful slave-girl foils their plots; Ali Baba gives his son to her in marriage and keeps the secret of the treasure. 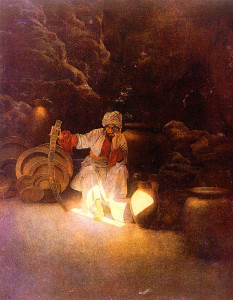