According to a Wall Street Journal article, analysts are saying that some of the best-performing currencies since the selloff subsided around the end of January are the ones with the weakest fundamentals. Analysts also recommend sticking to currencies seen as the most reliable bets, like the Mexican peso because Mexico’s government has passed watershed reforms of its telecommunications and state-run energy sectors in order to boost foreign investment while an economic recovery in the US, the country’s biggest trade partner, is laying the foundation for stronger growth. In addition, the South Korean won and Polish zloty are poised to benefit from improved growth in advanced economies.

However, analysts are maintaining a longer list of currencies to avoid with the Turkish lira and Russian ruble often at the top of the list due protests, political problems and/or geopolitical tensions while slowing growth in China isn’t helping the currencies of commodity producing emerging markets. 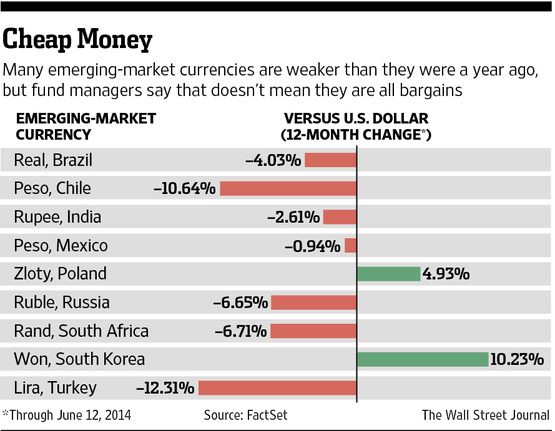 To read the whole article, How Fund Managers View Currencies in Emerging Markets, go to the website of the Wall Street Journal.