The Economic Times has reported that ETFs have invested $1.5 billion in India in the past three months leading up to May, which is the highest among emerging market BRIC countries such as Brazil, China and Russia: 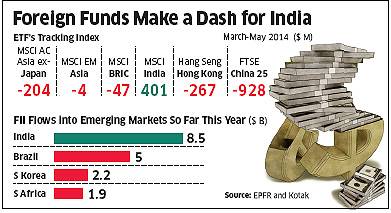 Moreover, the BSE Sensex has gained 14.7% in the past three months between March and May while Brazil’s Ibovespa Index gained 8.8% and Russia’s Micex Index and China’s Shanghai composite Index stayed flat in the same period.

It should also be mentioned that India has received FII flows worth over $8.5 billion so far this year while Brazil has seen flows worth $5 billion, South Korea has received $2.17 billion and South Africa managed over $1.89 billion during the same time.

For ETF investors thought, important India ETFs would include:

To read the whole article, India ETF flows touch $1.5 billion, highest among its emerging market peers like China, Russia, Brazil, go to the website of The Economic Times.