The Mexican Peso as a US Election Barometer (Bloomberg)

A Bloomberg article has noted that over the past four months, Mexico’s Peso currency has repeatedly declined when Donald Trump’s election outlook improves and rallied when his odds of winning slump. The Peso has also just tumbled to a 2 1/2-month low after Hillary Clinton canceled a two-day trip to California because she’s suffering from pneumonia.

Trump’s campaign promises of overhauling NAFTA and making Mexico pay for a border wall means few investors or traders want to be long on the Peso right now. Remittances to Mexico also plays an important role in the Mexican economy and helps prop up the Peso, but Trump’s trump card to get Mexico to pay for the wall would be to block or tax remittances. 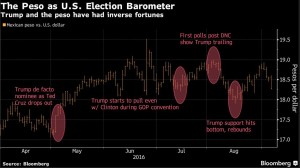 To read the whole article, Want to Know How Trump’s Doing? Just Look at Mexico’s Peso, go to the website of Bloomberg. In addition, check out our Mexico ADR list, Mexico closed-end funds list and Mexico ETF list.