Carlos Hardenberg, senior vice president and director of frontier markets strategies at Templeton Emerging Markets Group, has pointed out that while the 10 fastest-growing economies in the world fall under the emerging markets banner, stripping out China and India means the eight remaining fastest-growers are actually frontier markets. 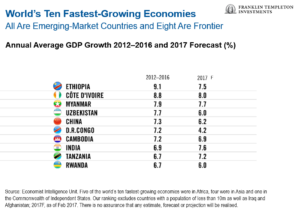 There are economic and demographic reasons why we see that trend of fast growth likely to continue, including a low median population age, increasing urbanisation in frontier markets compared with emerging and developed counterparts, and low but growing per-capita income.

In the so-called boom years of 2000–2008, when commodity prices were doing well, there was little impetus for reform, especially in those countries that relied on commodity exports.

But when the big shock came and commodity prices corrected dramatically, a lot of these countries needed to go back to the drawing board and back to reforms to attract capital to finance development.

At the end of the day, in order to attract capital, countries—especially frontier markets—need to show the world they can enact reforms.