Carlos Hardenberg, senior vice president and director of frontier markets strategies at Templeton Emerging Markets Group, has noted that when we talk about the attractiveness of frontier market investing, the single most important factor for many investors tends to be valuations. Currently, frontier market stocks are trading at what they consider to be very cheap valuations compared with both developed and emerging market peers. 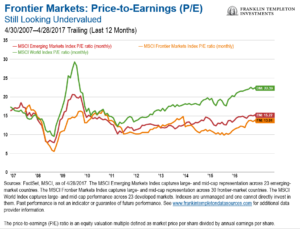 Hardenberg also noted that as an asset class, frontier markets have traditionally had very little correlation with emerging markets such as China, Brazil or Indonesia, or with developed markets including the United States, Japan or the United Kingdom. 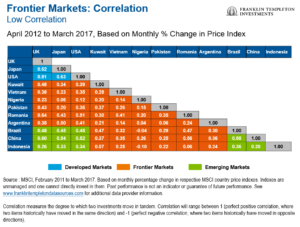 Finally and as with emerging markets in general, Hardenberg says there may be a tendency among the uninitiated to lump all frontier markets under the same umbrella which would be a mistake as, for example, Vietnam is very different from the Ivory Coast.