A recent market view article from Guggenheim Investments noted that a key factor driving the Chinese stock market higher over the past year has been a rapid run up in margin debt, which climbed to a high of 9.6% of market cap at the market peak back in June. This figure is high by both historical and global standards, and is likely understated due to significant hidden leverage outside the system. While margin debt has begun to unwind in the midst of the latest stock selloff, there is still a great deal of margin debt outstanding. This will mean continued turbulence for the Chinese stock market.

Guggenheim Investments also has the following chart showing Chinese margin debt (we assume its the debt that is known to exist) had reached a level almost as high as the level in the US stock market prior to the 1929 crash while more recent US crashes have seen much less margin debt exposure: 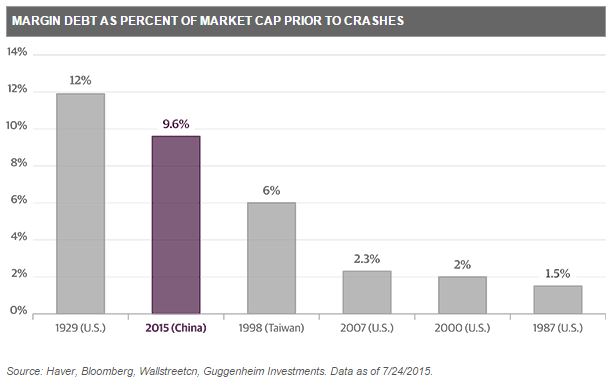 To read the whole article, China’s Dilemma: Is it 1987 or 1929?, go to the website of Guggenheim Investments. In addition, check out our China closed-end fund list and China ETF list pages.