The July newsletter from Asia Frontier Capital (AFC) observed that the rapid and seemingly chaotic development of the Chinese stock market over the past 12 months has shown how retail investors can create a stock market rally or bubble and eventually let the bubble burst as well. However, things are different with the Vietnam stock market where small retail investors are currently missing from the market. Moreover and despite the fact that domestic investors in Vietnam are already responsible for 80% – 90% of trading activities, there has been an absence of new investors coming online (the current press coverage of China’s stock markets in the Vietnamese as well as global media is not helping to attract new investors to the Vietnam stock market). Currently, active local Vietnamese investors are mainly following shares attracting foreign buyers – meaning they have primarily only showed interest in a handful of index names.

Vietnam also doesn’t produce statistics about new brokerage accounts. In China at the height of the recent bull market, 1.6 million new accounts were opened in just one week with the infamous stereotype that taxi drivers and housewives were driving the last phase of a stock market rally largely being confirmed by some of the data. 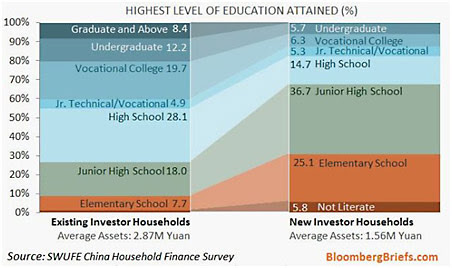 These stock market bubbles and bursts are not an exclusive phenomenon of either country as we have seen this occur in recent decades in other Asia markets such as Japan, Taiwan and Thailand. Then there are American or European investors who are willing to pay 50-100 times earnings for social media/tech/dot.com/green/3D printing stocks despite the fact that many of them are not even profitable or have no hopes of profits. AFC observed:

In my experience it usually does not matter to the majority of market participants whether a listed company is being valued at a price/earnings ratio of 5x or 50x as long as one expects further gains.