Lessons From When the USA was an Emerging Market (WSJ)

The government massively overinvested in transportation and land development. The banking system was inefficient and corrupt. State governments gorged on debt, then defaulted on it with aplomb. The stock market was crooked, rife with cronyism and insider trading. Stocks shot up and down like yo-yos.

The blog post is not referencing China, but the United States back in the 19th century when British investors learned some hard lessons about investing in emerging markets. A generation-long decline of UK bond yields from about 5.5% in 1816 to less than 3% in 1845, and again from roughly 4% in 1866 to 2% in 1897 had sent British investors looking for better returns in the much more risky US emerging market.

Stocks gained an average of 6.7% annually after inflation between 1802 and 1870​,​ when the US was an emerging market, but they’ve returned 6.9% ​on that basis since 1926. 19th​ century returns might also be overstated by at least a percentage point annually given the difficulties of measuring the performance of the thousands of stocks that disappeared without a trace in those days.

With that in mind, the blog post noted some key takeaways from when the US was an emerging market would include: 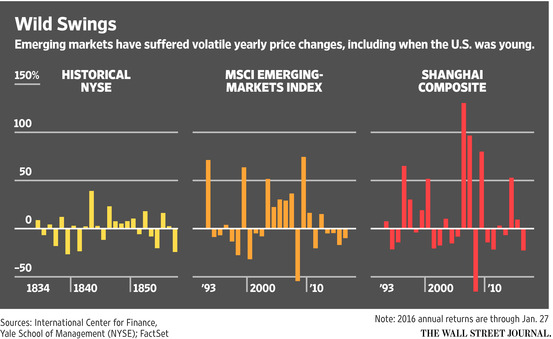 To read the whole article, Market Crashes, Stock Scandals: Lessons From the U.S. Frontier, go to the website of the Wall Street Journal.