A new Moody’s report entitled “Population Aging Will Dampen Economic Growth over the Next Two Decades” warns of a demographic tax that will slow economic growth over the next 20 years in both developed and emerging market economies as working-age populations shrink and household savings rates decline. Elena Duggar, a Moody’s Senior Vice President and one of the authors of the report, had this to say:

Madhavi Bokil, Assistant Vice President and another author of the report, said this:

“Policy reforms in the medium term which improve labor participations rates, streamline migration, and improve financial flows can partially mitigate the impact of aging on economic growth. Further, in the long term, innovation and technological progress that improves productivity have the potential to lessen the forecasted dampening effects of the rapid demographic changes.”

Aging is not just a developed-world problem as many emerging markets like Russia, Thailand, Chile and China have rapidly deteriorating demographics. Even relatively young countries such as Brazil and Turkey are aging. In fact, the pace of aging in some of these emerging market countries is more rapid than in developed economies.

The press release goes on to say:

Moody’s projects that growth in the working-age population of the world during 2015-30 will only be half that of the growth during the previous 15 years (i.e., 13.6% vs. 24.6%). All countries, except a handful in Africa, will face either a slower-growing or declining working-age population.

Worldwide aging will reduce economic growth via lower labor supply, and decline in savings rates that will reduce investment. It is estimated that a one percentage point rise in the old dependency ratio (i.e., the ratio of the population aged 65+ to the population aged 15-64), an indicator of aging, will lead to a 0.5-1.2 percentage points decline in the average savings rate which will affect investment adversely.

The Daily Mirror also published the following graphics presumably from the report: 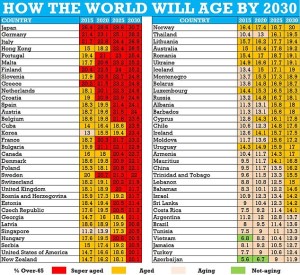 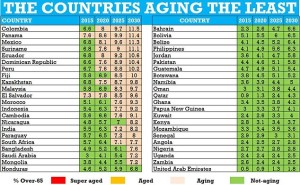 To read the press release, Moody’s: Aging will reduce economic growth worldwide in the next two decades, go to the website of Moody’s. In addition, the Daily Mail has the following article: Super-aged Britain: One in five will be 65-plus in a decade…with dire economic impact, say experts