Tassos Stassopoulos, who manages the Emerging Consumer strategy as well as the Global Growth/Thematic strategies at AllianceBernstein, has written an interesting post for the AllianceBernstein Blog on Investing noting how young people in emerging market countries are quickly becoming better educated and more qualified than their elders — including those at the peak of their earning abilities. As a result, people over the age of 45 — who constitute the rising middle classes — are increasingly losing their jobs and getting pushed back down to the bottom of the economic pyramid.

As the following chart illustrates, emerging market workers are reaching their peak income levels at very young ages, often between 35 and 39, a decade earlier than workers developed markets: 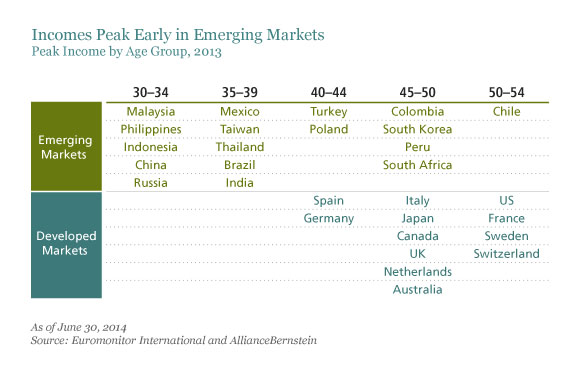 The post then gave the following, all too common example of someone who has fallen out of the middle class:

For example, last month we talked with Enrique, from the Mexican town of Santiago de Querétaro. At 52, he earns 70% less as a freelance medical rep than he earned as a mid-level executive when he was 45. Back then, he bought fashionable clothes for his kids on weekly trips to the US; his family often went to the movies and restaurants and enjoyed expensive summer beach holidays. But in 2006, Enrique lost his job to a younger candidate. Suddenly, he was in financial free fall.

AllianceBernstein believes that problems faced by older workers like Enrique will have a profound impact on the spending power and preferences of older people in emerging markets from Chile to China because as workers age, they will likely face financial insecurity – meaning luxury and leisure goods won’t be their priorities. Hence, AllianceBernstein believes successful consumer companies will be those that understand how to grab a growing share of the older demographic by offering quality products at good value and services such as retirement insurance or cheaper healthcare.

As for investors, aging trends also serve as a reminder that traditional research into company fundamentals must be complemented by an understanding of the underlying forces that are shaping the evolution of emerging markets.

To read the whole blog post, Growing Older in Emerging Markets, go to the AllianceBernstein Blog on Investing.